A Breath of Fresh Air Jan 23

Gina Schock: From Working-Class Baltimore to Drumming for the Go-Gos

After a lifelong journey of believing in the power of positive thinking, Gina Schock, the baby of a middle class family, is shocked to experience the fruits of her ambition when she joins the iconic all-female punk rock band, The Go-Gos, and finds unprecedented success.

Gina is the galvanising force behind the Los Angeles all-female rock band, the Go Go’s, who remain the only all-women rock band to play their own instruments, write their own songs, and have their debut album skyrocket to number one. She has recently released a coffee table book called Made in Hollywood All Access with the Go Go’s.

Gina was determined to make her dream of being a rock star a reality. She left her hometown of Baltimore at the age of 21 in her father’s pickup truck, believing anything was possible. She never stopped believing in the power of positive thinking, and worked hard to perfect her craft. After endless practice and saving her allowance money for new equipment, she got her first gig with an all-girl band. After joining The Go-Gos, her hard work and dedication paid off and the band skyrocketed to fame. 40 years later, Gina is still touring and the band is still thriving. She wouldn’t trade a single moment of her journey for anything. 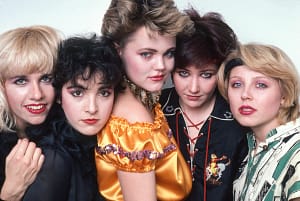